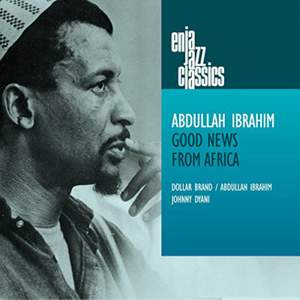 Reissue of Abdullah Ibrahim's 1973 duo recording with bassist Johnny Dyani, which was originally released on Enja in 1975 under the name, Dollar Brand Duo. Pianist-composer Abdullah Ibrahim (formerly known as "Dollar Brand") has long ranked among South Africa's giants alongside Hugh Masekela, Miriam Makeba and the late Kippie Mokoetsi. A master of improvisation with a distinctive African edge, the exiled Cape Town musician has developed a musical style over the past 30 years that defies categorisation. Rather, it is a fascinating mosaic of diverse traditions including African rutal and township rhythms, classical jazz, and gospel. South African folk melodies are enriched with Western harmonies, coalescing into a gracefullly fluid and intensely spiritual whole. Best known for his hypnotic and introspective stream-of-consciousness compositions and his innovative interpretations of Duke Ellington, Thelonious Monk and Billy Strayhorn classics, Ibrahim's music is at once accessible and complex, intriguing and lyrical. He has indefatigably explored and fused classical jazz with the multitude of influences that make up traditional and contemporary South Afrian music. "Good News From Africa was the shining, transcendent release by both of these great musicians and one that should grace every listener's collection." - ALLMusic Personnel: Abdullah Ibrahim (piano, vocal, flute), Johnny Dyani (bass, vocal, bells)