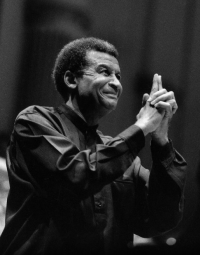 Abdullah Ibrahim is a South African pianist and composer. His music reflects many of the musical influences of his childhood in the multicultural port areas of Cape Town, ranging from traditional African songs to the gospel of the AME Church and Ragas, to more modern jazz and other Western styles. Ibrahim is considered the leading figure in the subgenre of Cape jazz. Within jazz, his music particularly reflects the influence of Thelonious Monk and Duke Ellington. He is known especially for "Mannenberg", a jazz piece that became a notable anti-apartheid anthem.

During the apartheid era in the 1960s Ibrahim moved to New York City and, apart from a brief return to South Africa in the 1970s, remained in exile until the early '90s.