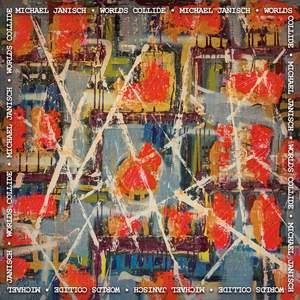 Janisch enjoys considerable kudos as the founder and head of the dynamic independent record label Whirlwind Recordings, but that should not overshadow his skill as a leader, composer and soloist.... — Jazzwise, September 2019, 4 out of 5 stars More…

Michael Janisch: An Ode to a Norwegian Strobe

Michael Janisch: The JJ I Knew

Tirelessly active as solo artist, session player, composer, producer and record label owner, Janisch is one of the most preeminent bassists across the British, US and European scenes. Twofold title 'Worlds Collide' primarily speaks of the variety in Janisch's six engaging tracks - each is quite different to its neighbour. But he also sees it as analogous to what is going on in the wider world right now, especially the continual toxicity of social disclosure driven by tribalist views from differing positions on the political spectrum.

The tracks include the rock-driven strut of "Another London", with fundamental ostinato bass groove, guitar-and-synth vistas and lush horns, reflects Janisch's positive view of walking through this great city. It's a decidedly cool groove, interspersed with contemplation, featuring an epic alto arc from O'Gallagher. Rez Abbasi's mesmeric guitar figure maps out "An Ode to a Norwegian Strobe" (Janisch is a big fan of Strobes and Aphex Twin, as well as regularly performing with Norway's jazz star Marius Neset), and its sumptuous buoyancy is fully explored by the band to cinematic conclusion.

The technical and emotional wonder of 'Worlds Collide' was nailed in Clarence Penn's immediate, adrenalin-rushed quip to Michael Janisch, once the whole album was 'wrapped': "Congratulations on a great record - you're really gonna turn some heads with this!" What he was chiefly getting at is the simple truth that, right here, is a celebration of boundary-crossing contemporary jazz unfolding in all its captivating, artistic magnificence. Janisch has glimpsed a new horizon for himself and, with inimitable verve, is going for it.

Janisch enjoys considerable kudos as the founder and head of the dynamic independent record label Whirlwind Recordings, but that should not overshadow his skill as a leader, composer and soloist. This new album is a worthy follow-up to 2015’s Paradigm Shift, and while it tackles similar themes of social and political regression, especially in an online world, the writing and arranging have gone up a notch.