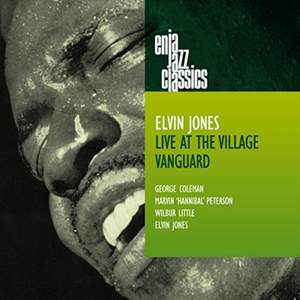 Live at the Village Vanguard

Reissue of Elvin Jones 1968 live recording from New York's hallowed jazz venue the Village Vanguard. This is the first album master drummer Elvin Jones did for Enja records. Some of his previous studio recordings are lacking the real energy of Jones' music that can be heard in concert. 'Live at the Village Vanguard' showcases the art of the jazz improvisation. Jones lays down his poyrhythms with his usual skill and does some of the best solo work that he has ever done on record. Bassist Wilbur Little has the job of providing the underlying bass lines and any harmonic implication, and does so with a fullbodied sound that constantly supports the goup. Tenor saxophonist George Coleman comes out of a very traditional bag, but uplifts the music as his linear style grows within a solo. Trumpeter Hannibal Marvin Peterson turns in one of the most devastating solos that has been heard in quite awhile. Control, range and ideas all fully there and operating. The four tunes explored on this album give forth that excitement and vitality that makes contemporary straight ahead jazz unique music. Personnel: George Coleman (tenor saxophone), Marvin 'Hannibal' Peterson (trumpet), Willbur Little (bass), Elvin Jones (drums)