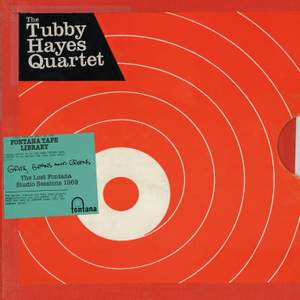 One of the most exciting archive discoveries of recent times, after 50 years on the shelf Grits, Beans And Greens is everything Tubby Hayes worshippers had hoped for, and it already sounds like a classic.

Undoubtedly one of the most important, influential and ground breaking UK jazz musicians of all time, during the ‘50s and early ‘60s, Tubby Hayes stood apart from many of his UK-based contemporaries, displaying a self-confidence and virtuoso musical delivery that placed him shoulder to shoulder with many of the leading American jazzmen of the day. He worked with the likes of Quincy Jones, Ella Fitzgerald, Charles Mingus and Duke Ellington and his many fans included Miles Davis, Cannonball Adderley and Sonny Rollins. He had his own primetime TV show and was the face of UK jazz. Thought to be either lost or destroyed until their recent rediscovery, these sessions are being hailed as among the very best work in the Hayes discography.

“Sometimes when tapes that have been lost or rumoured to exist finally surface there is a touch of anti-climax or the need to 'spin' them in a way that makes them more important than they are” explains Hayes' biographer and award-winning British jazz saxophonist Simon Spillett. “These sessions, on the other hand, are absolute classics in every regard. It's an album that can sit equally alongside the best Coltrane, Rollins or Dexter Gordon LPs. It really is a lost masterpiece, make no mistake.”

At the time the ‘Grits, Beans and Greens’ sessions were recorded, Hayes was also working on a more commercial project, ‘The Orchestra’, which found him aiming for the pop and easy-listening markets by covering The Beatles, Burt Bacharach and Nancy Sinatra. Ironically, sales of 'The Orchestra' were poor by the standards of his previous albums and as Hayes' health began to falter in the early 1970s, no further recordings took place, leaving the ‘Grits, Beans and Greens’ reels forgotten and unreleased. After his tragic death following open-heart surgery, aged just 38, in 1973, the tapes were simply filed away, eventually becoming mislaid as the label's archives went through a series of corporate buy-outs. The tapes were discovered when the late jazz writer and Polygram Catalogue Manager Richard Cook came across Hayes’ diary and noticed entries detailing a number of recording sessions. He subsequently trawled through the Polygram archives and made what was to be one of the most significant discoveries in jazz history when he came across the never-before-heard 1969 tapes. Cook left the company before the tapes were released and it wasn’t until last year that knowledge of their existence resurfaced.

The sessions are released on 1LP vinyl and on 1CD (as the album that never was) and as a two-CD deluxe edition complete with 18 tracks, in date and master tape running order which includes studio chatter, alternative takes and false starts. The audio have also gone through MQA [Master Quality Authenticated] technology, MQA-CD plays back on all CD players. When a conventional CD player is connected to an MQA-enabled device, the CD will reveal the original master quality.