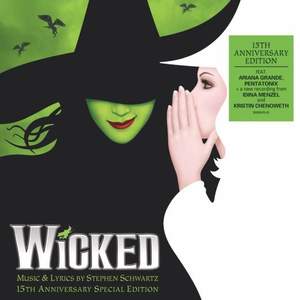 1 No One Mourns The Wicked

3 The Wizard And I

4 What Is This Feeling?

17 March Of The Witch Hunters

To celebrate 15 years of what The New York Times has referred to as “the defining musical of the decade,” Verve/UMe will release a special 2-CD WICKED: The 15th Anniversary Special Edition on February 8th, 2019, featuring the Original Broadway Cast Recording plus 4 bonus tracks including “The Wizard and I” by Ariana Grande, “For Good” by Kristin Chenoweth and Idina Menzel, “What Is This Feeling?” by Pentatonix, and “As Long As You’re Mine” by Ledisi and Adam Lambert.

In its first decade on Broadway, WICKED remained Broadway’s highest grossing show for an unprecedented nine consecutive years. Declared as “Broadway’s biggest blockbuster” by The New York Times, WICKED has grossed over $4.6 billion and has been seen by over 55 million people worldwide since its premiere 15 years ago. The musical has played in 16 countries around the world and has been translated into six languages. The Grammy Award-winning Original Cast Recording (DECCA Broadway) of the smash-hit Broadway musical WICKED is certified triple “Platinum” by the Recording Industry Association of America (RIAA) for sales of nearly 4 million copies and spent more than 257 weeks at the #1 spot on the Billboard’s Broadway Chart. On October 29th, NBC aired “A Very Wicked Halloween: Celebrating 15 years on Broadway,” to celebrate the music and magic of what The Observer has called “one of

the biggest hits of our age.” The NBC special was hosted by original cast members Idina Menzel and Kristin Chenoweth and featured performances by Ariana Grande, Pentatonix, Ledisi, and Adam Lambert.