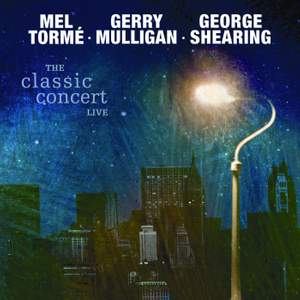 Count Basie, Jimmy Rushing, Eddie Durham: I Sent For You Yesterday And Here You Come Today

Alan Bergman, Marilyn Bergman, Michel Legrand: What Are You Doing The Rest Of Your Life?

Arlen: Blues in the Night

Berlin, I: The Song Is Ended

On June 29, 1982, three of the biggest names in jazz - vocalist Mel Tormé, pianist George Shearing and baritone saxophonist Gerry Mulligan - appeared onstage at Carnegie Hall to perform their first ever live concert together. This landmark concert fills an important gap in each of the three legends' significant discographies. Whether performing one of Mulligan's classic compositions such as "Line for Lyons" or a standard like "Round Midnight" the trio is in top form. The three stars create the feeling of playing in an intimate jazz club, despite the fact that they are playing in Carnegie Hall, with the orchestra sensitive to their solos. Personnel: Mel Tormé (vocals), Gerry Mulligan (baritone saxophone), George Shearing (piano), Don Thompson (bass), Gerry Mulligan Orchestra