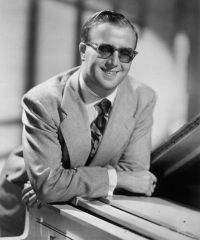 Sir George Albert Shearing, was a British jazz pianist who for many years led a popular jazz group that recorded for Discovery Records, MGM Records and Capitol Records. Shearing was the composer of over 300 titles, including the jazz standards "Lullaby of Birdland" and "Conception", and had multiple albums on the Billboard charts during the 1950s, 1960s, 1980s and 1990s. He died of heart failure in New York City, at the age of 91.