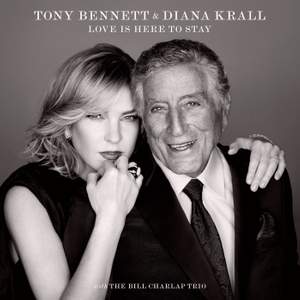 Love Is Here To Stay

Bennett, astonishgly is 92 but he knows exxactly which aspects of his voice still work, such as his imaginative yet impeccable phrasing, and which may not, such as his projection, so both singers... — BBC Music Magazine, November 2018, 4 out of 5 stars More…

Gershwin: My One and Only

Gershwin: I Got Rhythm

Gershwin: Do It Again

Gershwin: I've got a crush on you

Tony and Diana continue their 20 + year collaboration to release their first album together celebrating the songbook of the Gershwin brothers, the greatest songwriters of the 20th Century. This intimate record has Tony and Diana accompanied by the Bill Charlap Trio, enabling the essence of each song to be fully realized.

• Diana is the only jazz singer to have eight albums debut at the top of the Billboard Jazz Albums chart.

• George Gershwin was one of the most remarkable American composers of the 20th century and his collection of songs became the great American jazz standards incl. Love Is Here To Stay, I’ve Got a Crush on You, Rhapsody In Blue, I Got Rhythm, Fascinatin’ Rhythm, Embraceable You, S’Wonderful and many more.

Bennett, astonishgly is 92 but he knows exxactly which aspects of his voice still work, such as his imaginative yet impeccable phrasing, and which may not, such as his projection, so both singers opt for an affectionate intimacy.