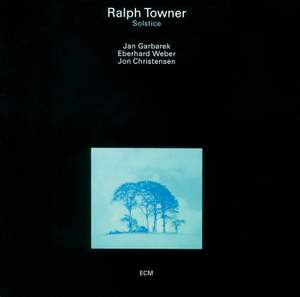 Down Beat: “Solstice inspires through its expressive openness… revealing depth of texture, nuance and meaning.” Perfect Sound Forever: “The LP is not only one of the moodiest ever published by ECM, but by anyone.” Solstice, recorded 1974, belongs to the great early production projects of ECM, with a new band formed in the studio. It’s the first of Towner’s recorded encounters with the European players, and this US-Norwegian-German quartet has a character all its own. Ralph’s synthesis of classical guitar technique and jazz improvisational skills inspires all participants on now-famous tunes including “Nimbus” and “Oceanus”. (Many future associations grew out of this meeting, including the Garbarek/Towner collaboration on Dis, and the integration of Eberhard Weber into the Jan Garbarek Group, and of Jon Christensen into Weber’s Colours band.)

Initially published in September 1975, vinyl is reissued in April 2017 as audiophile pressing taken from the original analog tapes.