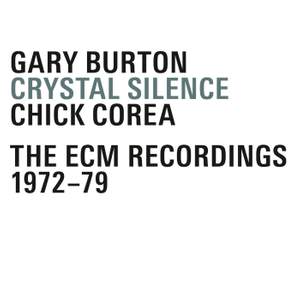 Corea: What Game Shall We Play Today

Dazzling duo recordings by two of modern jazz's most creative players in a 4-CD Set, bringing together the history-making recordings 'Crystal Silence' (1972), 'Duet' (1978) and the live double album 'In Concert, Z³rich, October 28, 1979'.

The duo was a seldom-tested format in jazz when pianist Chick Corea and vibraphonist Gary Burton, at the instigation of Manfred Eicher, came together for 'Crystal Silence', but its luminous music proved a resounding success and that first ECM recording became enormously influential, changing directions in modern jazz. Both 'Duet' and the Z³rich recording won Grammy awards, and Chick and Gary toured to worldwide acclaim, astonishing audiences with their improvisational fluency. They have continued to make music together, for almost 40 years now. In 2008 Concord Records issued 'The New Crystal Silence' which promptly topped the US jazz charts. Now is the moment for younger audiences to discover the real thing - the original 'Crystal Silence'. The essential and authentic 'Crystal Silence - The ECM Recordings' shows how the story began. Two live selections, "I'm Your Pal/Hullo Bolinas" and "Love Castle", appear on CD for the first time in this collection. Other bonuses include rare artist photos, reproductions of original covers, and liner notes.