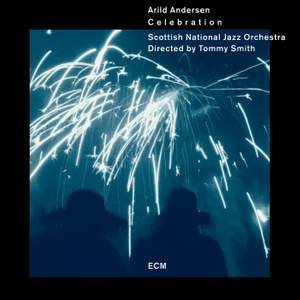 Andersen's composition Independency is a 16-minute highlight, in a sensitive and powerful arrangement by Mike Gibbs. Other contributing arrangers are Makoto Ozone, the Japanese pianist who played alongside Smith in Gary Burton's quartet in the 1980s (Corea's Crystal Silence), Christian Jacob (Holland's May Dance), Geoff Keezer (Jarrett's My Song) and Trygve Seim/Øyvind Bræke (Seim's own Ulrikas Dans). All of them contribute sterling work, and their arrangements are likely to enter modern jazz's big band repertory book.

Recorded live at the Royal Conservatoire of Scotland in Glasgow, Celebration is a highly attractive album for a broad listenership, and as a statement about music introduced by ECM will be of special interest to long-time followers of the label.

The double-bass of Norwegian Arild Andersen has been an integral part of the sound of ECM for more than four decades, but it's heard for the first time as the lead voice in large ensemble arrangements of music. The project had its genesis in 2009 when ECM's 40th anniversary inspired a number of tributes and festivals around the world. Tenorist Tommy Smith, who had been playing extensively with Arild in Andersen's trio (including Live At Belleville), proposed a special event with the Scottish National Jazz Orchestra, the big band he had founded in 1995.