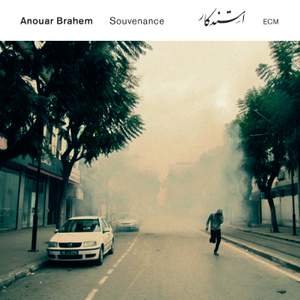 Anouar Brahem: On The Road

The music of 'Souvenance', by turns graceful, hypnotic, and taut and starkly dramatic, was recorded in 2014 - six years after oud-master Anouar Brahem's last ECM album, 'The Astounding Eyes of Rita'.

"It took a long time to write this music," he acknowledges, noting that his emotional world had been usurped by the unfolding story of political upheaval sweeping first through Tunisia then through the neighbouring countries. Extraordinary waves of change, accompanied by great hopes and fears. "I don't claim a direct link between my compositions and the events taking place in Tunisia," says Anouar, "but I have been deeply affected by them."

New directions for the music find pianist Fran?ois Couturier returning to the Brahem group, frequently supported by subtle string orchestration. The strings (the distinguished Orchestra della Svizzera Italiana) have a glowing transparency and fragility in these pieces, often providing shimmering texture against which the compelling contributions of the quartet members - and, above all, Anouar Brahem's unique oud-playing - stand out in bold relief.

'Souvenance' translates as "remembrance", but the album - like the individual track titles - was named retrospectively. The double CD was recorded at the Lugano studio in May 2014, and was produced by Manfred Eicher.