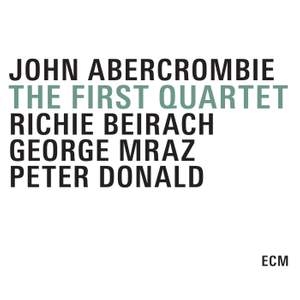 Beirach: What Are The Rules

John Abercrombie: To Be

This 3-CD set with recordings from 1978 to 1980, issued in ECM's acclaimed Old & New Masters series, returns some historically-important material to the catalogue, namely the albums 'Arcade', 'Abercrombie Quartet' and 'M'.

The quartet with Richie Beirach, George Mraz and Peter Donald - John Abercrombie's first touring band as a leader - was the group in which the guitarist defined some priorities, moving away from a jazz-rock period into a more spacious, impressionistic and original music. Abercrombie and pianist Beirach had a strong musical rapport as improvisers and wrote almost all of the band's book between them. George Mraz and Peter Donald provided imaginative support.

For this edition the recordings - made in Oslo and Ludwigsburg and produced by Manfred Eicher - were re-mastered from original analog sources.

It's a first appearance on CD for these discs in most world territories ('Arcade' was briefly available on compact disc in Japan) and re-release of these titles has been much requested by followers of both Abercrombie and Beirach as well as ECM collectors.

From the liner notes, by John Kelman: "With the release of 'Arcade', 'Abercrombie Quartet' and 'M', John Abercrombie's entire ECM discography as a leader is finally available on CD. Looking back at these discs and their position in his oeuvre, they are revealed as seminal documents of Abercrombie's arrival as a distinctive writer, improvising guitarist and bandleader. Abercrombie's subsequent career has, in many ways, been built on the foundational strength of these early quartet recordings."