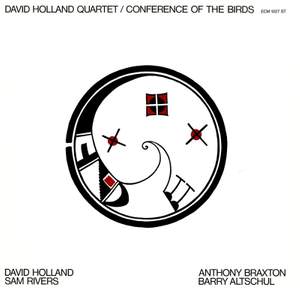 The album has plenty of driving, freeform fun, with Four Winds, Interception and See-Saw offering more than enough of your recommended 5-a-day skronk intake. Great to hear Braxton, still at a... — Matt Groom, Presto Jazz More…

It had been preceded by ECM duo albums with Barre Phillips and with Derek Bailey as well as the cooperative band Circle’s great Paris Concert, but Conference of the Birds, recorded in 1972, was Dave Holland’s first album as a full-fledged leader. An album of driving, progressive jazz it is also of historical significance as the only occasion when Sam Rivers and Anthony Braxton, two of the music’s most strikingly original saxophonists, recorded together. Inside Dave’s compositions they could meet – if briefly - and share ideas. This summit meeting received raves from the press. “If you’ve found the new music lacking in swing, cohesion and variety, get to this album,” insisted Down Beat in a five star review. “It’s Holland’s date but each man contributes equally. The six Holland tunes offer great improvisational frameworks, and his bass playing, both arco and pizzicato, couldn’t be better… Don’t miss this one.”

The album has plenty of driving, freeform fun, with Four Winds, Interception and See-Saw offering more than enough of your recommended 5-a-day skronk intake. Great to hear Braxton, still at a relatively early stage of his career, developing that astonishing range, including the exhilarating high speed, twittering staccato harmonics that became a hallmark of his style, clearly inspired by Rivers’ authoritative presence.