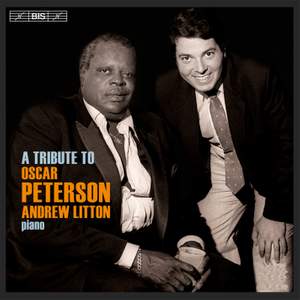 A Tribute to Oscar Peterson

Ballads predominate, providing ample scope for embellishment...this disc is less about jazz's sound of surprise than sheer delight in dazzlement. — BBC Music Magazine, May 2014, 3 out of 5 stars

Warren, H: Lulu's Back In Town

Jones, T: A Child is Born

Carmichael, H: The Nearness Of You

Ellington, M: Things ain't what they used to be

On his 16th birthday, receiving an LP of Oscar Peterson playing solo, Andrew Litton was ‘hooked’, to use his own term: ‘If I’ve ever experienced anything close to an epiphany, this was it!’ Having had opportunities to hear pianists such as Horowitz, Rubinstein, Richter and Gilels in recital, he was struck by Peterson’s playing: ’the amazing colours and voicing, the feathering of the sustain pedal (only Horowitz had such an astonishing pedal technique!), the achingly beautiful original harmonies…’ Collecting all of Peterson’s recordings and seeking out opportunities to hear him live and meet him in person, over the years Litton realized that the admiration he felt was shared by many of the classical musicians that he met during his ‘day job’ as a conductor. When he started to come across transcriptions of Peterson’s improvisations made by such musician friends, Litton began collecting and learning them himself. He started with one of his personal favourites, Richard Rodgers’ Little Girl Blue, using it as an encore when making appearances as a pianist – he even played it at a memorial service for his late mother. As he kept learning new improvisations, what Litton himself describes as ‘a dream’ took shape – to record his own performances of some of these transcriptions as a tribute to his hero. Litton’s selection includes twelve classic songs from recordings spanning four decades, from Thelonius Monk’s ‘Round Midnight and Billy Strayhorn’s Take the ‘A’ Train to Thad Jones’ A Child is Born, and his preparations for this very special recording have if anything deepened his admiration for Peterson: ‘He did things daily at the piano while spontaneously improvising that the rest of us spend a lifetime trying to achieve.’

Ballads predominate, providing ample scope for embellishment...this disc is less about jazz's sound of surprise than sheer delight in dazzlement.