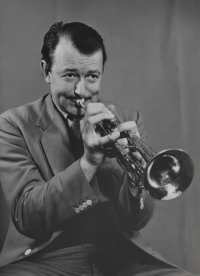 Humphrey Richard Adeane Lyttelton also known as Humph, was an English jazz musician and broadcaster from the Lyttelton family.

Having taught himself the trumpet at school, Lyttelton became a professional musician, leading his own eight-piece band, which recorded a hit single, "Bad Penny Blues", in 1956. As a broadcaster, he presented BBC Radio 2's The Best of Jazz for forty years, and hosted the comedy panel game I'm Sorry I Haven't a Clue on Radio 4, becoming the UK's oldest panel game host.

Lyttelton was also a cartoonist, collaborating on the long-running Flook series in the Daily Mail, and a calligrapher and president of The Society for Italic Handwriting.