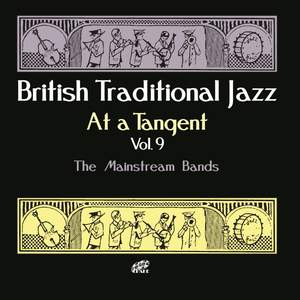 British Traditional Jazz - At A Tangent Vol. 9 - The Mainstream Bands

Warren, H: September In The Rain

Humphrey Lyttelton: Do the Beaulieu

Humphrey Lyttelton: Swingin' on the Gate

Kenny Baker: Act One, Scene One

Kenny Baker: Too Cool for the Blues

Lane, B: I Hear Music

Vol. 9 in the AT A TANGENT series looks at Mainstream bands on the British Jazz scene and completes the CDs devoted to different styles in the series.

‘Mainstream’ was a term coined in the early 1950s to describe a more arranged style of Jazz sitting somewhere between Trad/Dixieland and Bebop/Modern - it is closely akin to Small Band Swing of the 1930s/40s.

The main protagonist in the UK is usually held to be Humphrey Lyttelton, but musicians like Kenny Baker and his associates had be playing it before Lyttelton embarked on it in the mid-50s.

The problem in compiling this collection is that there were very few working bands playing the style. The Jazz clubs of the 1950s and early 60s were very Trad. Bands such as Lyttelton’s and Fairweather-Brown ploughed very lonely furrows. It was a different matter with broadcasts and recordings where various aggregations fronted by Kenny Baker and sundry Lyttelton alumni got regular outings. As with most attempts to label music ‘Mainstream’ was inclined to be a bit blurred at the edges. To illustrate the point tracks by Beboppers such as John Dankworth and John Cox are included to show that they slot in without sounding out of place.

Several tracks are previously unissued and it is hoped that the CD serves as both an introduction to the style and explode some myths.