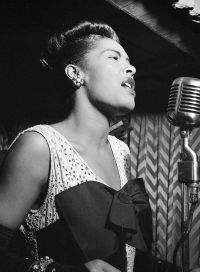 Eleanora Fagan known professionally as Billie Holiday, was an American jazz and swing music singer. Nicknamed "Lady Day" by her friend and music partner Lester Young, Holiday had an innovative influence on jazz music and pop singing. Her vocal style, strongly inspired by jazz instrumentalists, pioneered a new way of manipulating phrasing and tempo. She was known for her vocal delivery and improvisational skills.

After a turbulent childhood, Holiday began singing in nightclubs in Harlem, where she was heard by producer John Hammond, who liked her voice. She signed a recording contract with Brunswick in 1935. 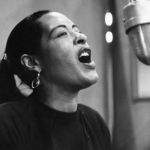 Billie Holiday was just a couple months away from her 43rd birthday when she entered Columbia Records’ 30th Street Studio on February 18, 1958 to record her troubled late masterpiece Lady in Satin, as heart-breaking today as it was then.