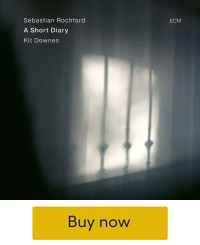 Drummer/composer Sebastian Rochford describes the concept of his new ECM album A Short Diary, ascribed with the addendum (of loss), as “a sonic memory, created with love, out of need for comfort”. Dedicated to Sebastian’s father, the poet Gerard Rochford, much of the music featured on A Short Diary was composed following his passing in 2019, with the final piece ‘Even Now I Think of Her’ being one composed by Gerard himself. Sebastian, whose past work includes being a leading member of experimental jazz group Polar Bear and the former drummer of Afrobeat-jazz fusion band Sons of Kemet, has appeared on numerous ECM recordings to this date, but A Short Diary marks his first self-penned release on the label. Sebastian featured on pianist Kit Downes’ record Dreamlife of Debris back in 2019, and now Downes returns the favour by being the sole collaborator featured on A Short Diary, and in quite a big way.

The recording of the album took place in Rochford’s childhood home, with the music being composed on Rochford Sr.’s piano and details of the atmosphere and ambiance recorded on the sheet music before it was presented to Downes. These aforementioned ‘performance notes’ provided by Rochford give some unorthodox performance instructions to Downes, like the opening track ‘This Tune Your Ears Will Never Hear’ which Rochford describes “Like a child calling out alone into an empty void.” Now despite there being Rochford’s name on the cover, he only actually appears as a performer a small handful of times throughout the entire record, and for the rest of A Short Diary Rochford acts purely as a composer while it’s Downes performing these solo piano pieces.

For the odd moments where Rochford himself does make an appearance, he keeps his playing pretty sparse; he provides subtle backing on the opening track that accentuates Downes’ piano chords with a marching rhythm, or offering context to the pianist’s playing with some careful hat and snare brushing on tracks like ‘Love You Grampa’ and ‘Silver Light’. Dynamics begin to build up with the dramatically-tinged progression on ‘Ten of Us’, with Rochford joining Downes in one of his rare appearances to augment the climax of the tune with some (comparatively) more lively drumming.

The final tune, the aforementioned Rochford Sr. composition ‘Even Now I Think of Her’, was originally something Sebastian’s father would sing down the phone to him, and was later passed on to Kit to be transcribed into a tune. Similarly, the inner booklet of A Short Diary features two of Seb’s father’s poems ‘My Father’s Hand’ and ‘Palette’, two pieces meditating on paternal relationships and death; a fitting tribute to Sebastian’s father and a touching form of posthumous collaboration. 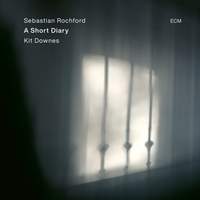