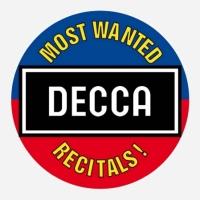 An absolute delight for collectors, this new series showcases Decca's rich heritage of singers' recitals, featuring performances from some of the biggest names of the 20th Century - José Carreras, Birgit Nilsson, Hans Hotter, Lisa Della Casa and many more! Of the fifty titles in the series, the majority have never been recorded on CD before.

The range of repertoire encompassed by these recitals is very broad - from opera arias and Lieder to popular songs, folk tunes and the hits of Broadway.