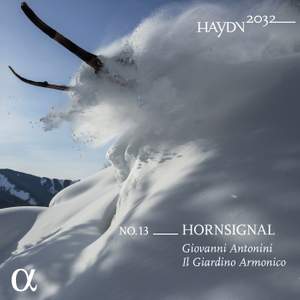 Antonini and Il Giardino Armonico dispatch [the Maria Theresia] with as much excitement as any version I’ve heard, and find in it a deal more light and shade than most other recordings. — Gramophone Magazine, February 2023

The Esterházy princes’ love of hunting prompted their ‘house composer’ Joseph Haydn to make extensive use of the horn. At the time, this was still the hand horn (Waldhorn), limited to ‘natural’ harmonics, since it did not yet have valves. Between 1761 and 1790 there were a total eighteen horn players in princely service, but no trumpeters! So, in his Symphony no.48 of 1769, for example, Haydn used the horns as ‘replacement trumpets’, instructing them to play an octave higher than usual. The horns strike a flamboyant note in Haydn’s symphonies, which is probably why an anonymous copyist of no.59 dubbed it the ‘Fire’ Symphony. The Symphony no.31 ‘Horn Signal’ (1765) gives its name to this thirteenth volume in the Haydn2032 Edition. The four horns ring out majestically and the musicians of Il Giardino Armonico perform this music in their characteristically impetuous style, under the fiery direction of Giovanni Antonini.

Antonini and Il Giardino Armonico dispatch [the Maria Theresia] with as much excitement as any version I’ve heard, and find in it a deal more light and shade than most other recordings.