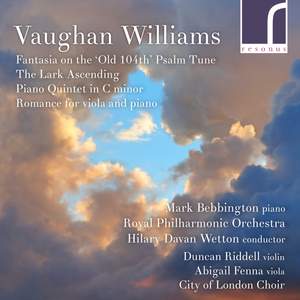 Its dramatic juxtapositions of Lisztian piano cadenzas with VW’s setting for choir and orchestra of Thomas Ravenscroft’s 17th-century psalm tune are stirringly captured on this new recording,... — BBC Music Magazine, January 2023, 4 out of 5 stars More…

To mark the 150th anniversary of the birth of Ralph Vaughan Williams, pianist Mark Bebbington, members of the Royal Philharmonic Orchestra and conductor Hilary Davan Wetton, present a recording of the composer’s almost totally neglected orchestral work, Fantasia on the Old 104th, for solo piano, choir and orchestra premiered at the Three Choirs Festival in 1950.

The album also features the Romance for viola and piano; the ever popular The Lark Ascending in the original 1914 version for solo violin and piano; and the early but ambitious Piano Quintet of 1904, which was embargoed untill as late as the 1990s and scored for the same combination of instruments as Schubert’s ‘Trout’ Quintet.

Its dramatic juxtapositions of Lisztian piano cadenzas with VW’s setting for choir and orchestra of Thomas Ravenscroft’s 17th-century psalm tune are stirringly captured on this new recording, where Mark Bebbington is the fiery soloist. Conductor Hilary Davan Wetton builds the piece effectively to a full-bore peroration, catching its occasionally unsettling mix of timehonoured sureties with a modern sense of dislocation.

Bebbington proves a persuasive, concentrated and articulate exponent, and he is backed to the hilt by the City of London Choir and RPO under Hilary Davan Wetton.