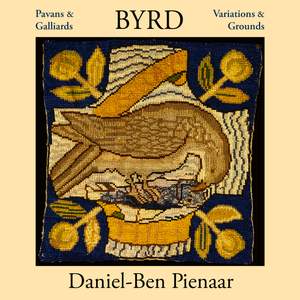 Byrd: O mistress mine, I must

Byrd: Pavana "The Earle of Salisbury"

Byrd: Pavana "The Earle of Salisbury"

Byrd: The wood so wild

Daniel-Ben Pienaar continues his campaign of performing early music on a modern piano with an abundant selection of Pavans & Galliards, Variations & Grounds by William Byrd.

The 16th-century composer's finest sets of dances and variations, featuring some of the Elizabethan era's most popular tunes, set the standard for English keyboard music for generations to come.

With astonishing virtuosity, Daniel-Ben elicits a wealth of colour and textures from his Steinway model D. Two-and-a-half hours of music spread over two CDs, this is most substantial survey of Byrd's keyboard music ever recorded on a modern piano, and ranges from frequently-heard works such as the First Pavan and Sellinger's Round to little-known gems like Callino Casturame and the late, great Quadran Pavan and Galliard.

Daniel-Ben Pienaar enjoys an international reputation for his unusual musicianship, in particular fo his highly individual readings of the German piano classics and for playing an extensive repertoire of preBach works on the piano. He is noted for a sizeable discography including much-praised complete traversals of Bach's Well-Tempered Clavier, Goldberg Variations and Six Partitas, as well as the Sonata cycles of Haydn, Mozart, Beethoven and Schubert. He has made the first complete recordings of the keyboard works of Jacobean composer Orlando Gibbons and of the mature piano music of South African composer Arnold van Wyk, and the first recording on piano of Gaspard Le Roux's Pices de clavessin (1705). Pienaar is an elected Fellow of the Royal Academy of Music, where he lectures, and a Professor of the University of London.

"Interpretations where within the letter critically observed, a numinous potency breaks free" - Gramophone

"A veritable Mo Farah of the keyboard" BBC Music Magazine

"One of the most exciting pianists of his generation" - Rondo

Pienaar lets the music inhabit a timeless space, orderly and agreeable but not terribly dramatic.