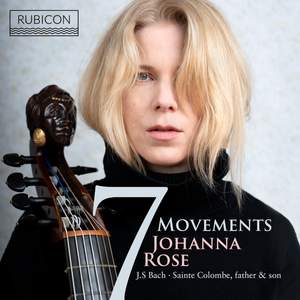 On this album Johanna Rose captures the excitement and spontaneity of the act of performing this music, and in so doing, charts new territory for the viola da gamba. — BBC Music Magazine, February 2023, 5 out of 5 stars

Movements; three suites each with seven movements. In her intriguing new album, viola da gambist Johanna Rose places a prelude by Sainte-Colombe (father) in front of the six movement Bach suite in D minor and finished the D major Bach suite with a chaconne by Sainte- Colombe. The third ‘suite’ is an all family affair with music by both father and son, fashioned into a suite by Rose.

Johanna Rose’s other albums for Rubicon have been praised by reviewers. Here’s what they said about ‘Histoires d’un Ange’: “Deliciously contemplative... a fine recital” - BBC Radio3 Record Review; “Enormously enjoyable... and so well has the programme been put together” - The Strad

Johanna Rose’s first album for the label was devoted to CPE Bach: “fascinating and fantastic gamba sonatas from Bach junior” - The Strad

On this album Johanna Rose captures the excitement and spontaneity of the act of performing this music, and in so doing, charts new territory for the viola da gamba.