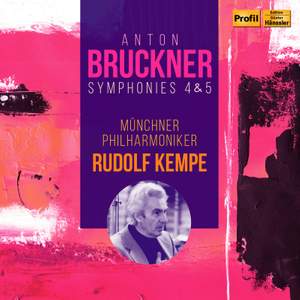 "Rudolf Kempe - born 4 June 1910 in Dresden-Niederpoyritz died 12 May 1976 in Zurich. From the age of 13 Rudolf Kempe received his musical education at the Orchestra School of the Dresden Staatskapelle. He took up his first post, as an oboist, in Dortmund in 1928 and only four months Iater was engaged as solo oboist in the Leipzig Gewandhaus Orchestra, He made his conducting debut with an amateur Leipzig orchestra in 1934. After taking a Figaro rehearsal at short notice for general music director Paul Schmitz, he was offered a contract as solo repetiteur and conductor at Leipzig Opera in addition to his orchestral position. In 1939 he was called up for military service. Between 1945 and 1948 he conducted in Chemnitz, then was conductor and deputy to general music director Hermann Abendroth at the German National Theatre in Weimar. In 1949 Joseph KeiIberth appointed him StaatskapeIImeister and his deputy at Dresden State Opera. In 1950 Kempe succeeded KeiIberth as general music director of Dresden State Opera and Orchestra. Although he Ieft Dresden in summer 19 53, his friendIy and fruitful colIaboration with the orchestra endured untiI the Iast year of his Iife. Rudolf Kempe was general music director of Bavarian State Opera in Munich from 1952 to 1954, after which he increasingly made guest appearances in the world's great opera houses and with Ieading orchestras. He conducted at Bayreuth from 1960 to 1963. Appointed at the express request of his predecessor Sir Thomas Beecham, from 1961 to 1975 Kempe was music director of London's Royal Philharmonic Orchestra, and from 1965 to 1972 chief conductor of the Tonhalle Orchestra Zurich. In 1967 he took over the artistic direction of the Munich PhiIharmonic and also became music director of London's BBC Symphony Orchestra in 1975. Kempe died on 12 May 1976 in Zurich at the age of 66 . The Missa Solemnis which he had pIanned as the opening concert of the London Proms in JuIy 1976 was instead performed as his memorial concert."