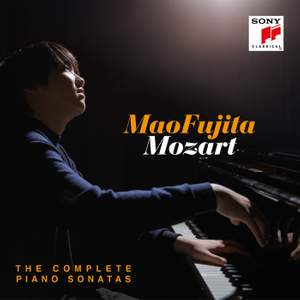 Mao Fujita, one of the most sought after pianists of his generation, debuts with a major recording project – the eagerly anticipated studio recording of Mozart’s complete Piano Sonatas, presented across 5 CDs. With an innate musical sensitivity and naturalness to his artistry, Mao Fujita has already impressed many leading musicians as one of those special talents which comes along only rarely.

An extraordinary performer who has the ability to instantly captivate any audience with his incredible musicianship, in 2017 he won First Prize at the prestigious Concours International de Piano Clara Haskil in Switzerland, along with the Audience Award, Prix Modern Times and the Prix Coup de Coeur, and in 2019 he became the Silver Medallist at the Tchaikovsky Competition in Moscow. This album, presented in a 5-CD special clamshell box, with soft-touch lamination, is a stunning debut from Mao Fujita – undoubtedly one of the world’s most extraordinarily gifted young pianists.

“A musician of tremendous versatility and taste, with a poetic sense of pulse...” – The Times