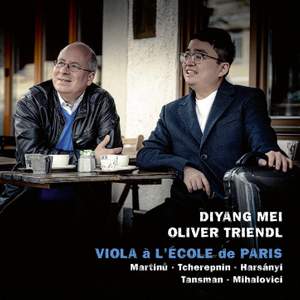 Tcherepnin: Violin Romance in A Major (Arr. A. Tcherepnin for Viola and Piano)

Harsányi: Sonata for Viola and Piano

Tcherepnin: Elegy, for Violin and Piano, Op. 43 (Arr. A. Tcherepnin for Viola and Piano)

In the wake of World War I and the October Revolution, countless artists emigrated from Eastern Europe to Paris particularly a number of Russians. They were able to build a reputation by virtue of keen public interest in their art, and sometimes thanks to savvy networking and helpful contacts. This was the case of Alexander Tcherepnin, whose father, a respected composer and conductor, had reaped great success in the first season of the legendary Ballets Russes in 1909.

Alexander Tcherepnin was soon welcomed and adopted by groups of artists such as the cole de Paris, a loose gathering of emigrants from several countries that included Bohuslav Martinu and Romanian composer Marcel Mihalovici. Alexander Tcherepnin's two brief pieces featured here, Romance (1922) and Elegy (1929), can only offer a glimpse of this widely traveled composer's cosmopolitan output: he was a man constantly in search of new ideas. Tcherepnin could switch from one musical genre to another in an instant; he eventually even incorporated influences from the Far East. Although the Romance is still entirely under the spell of Late Romanticism, the Elegy is already quasi-Modernist in tone a work revealing a heightened sensitivity for timbre, as we can hear, for instance, in its iridescent violin flageolets.

Approximately the same age as Tcherepnin and successful, like his colleague, as a pianist, Tibor Harsnyi arrived in Paris via the Netherlands in 1923... (Excerpt from the liner notes by Johannes Jansen).

Ever since violist Diyang Mei's brilliant success at the 2018 ARD International Music Competition, winning first prize in the viola category, the Audience Prize and several special prizes, he has been steadily furthering his international career. He was awarded first prizes at the 52nd International Instrumental Competition for Viola in Markneukirchen(2017), at the International Max Rostal Music Competition for Viola in Berlin (2015), at the Kulturkreis Gasteig Musikpreis for Strings in Munich (2015), at the IVC Young Artist Competition in Rochester (2012), at the 19th International Johannes Brahms Viola Competition in Austria (2012)and at the 10th International Viola and Cello Competition in Villa de Llanes, Spain (2008). As a soloist, Diyang Mei has performed with the Bavarian Radio Symphony Orchestra, the SWR Symphony Orchestra Stuttgart, the Munich Chamber Orchestra, the Konzerthausorchester Berlin, the Scottish Chamber Orchestra and at the Mecklenburg-Vorpommern Festival, the SWR Festival Schwetzingen, the Schwarzwald Music Festival and the Mozartfest in Wrzburg.

"the top flight viola player takes us on a trip to Paris, in this lively and unusual recital album showcasing works written by migr composers in the French capital." - BBC Music Magazine, 4 STARS