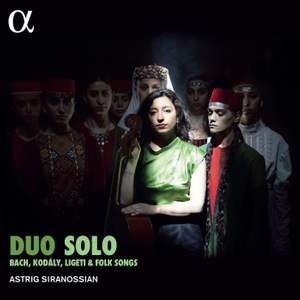 Kodály: Sonata for Solo Cello in B Minor, Op. 8

This album is the story of a dialogue between two voices: the singing voice and the voice of the cello, which has always been considered the instrument closest to the human voice. It is also the story of two worlds and the meeting of two cultures, East and West. The East we encounter here is Armenia, its thousand-year-old culture, its music and its songs, which resonate with the compositions of Bach, Kodály and Ligeti.

For the cellist Astrig Siranossian, vocal melody and the sound of the cello are two voices that she has always combined in her concerts, coupling a dance from a solo cello suite by Bach with an Armenian song that she performs with great sensitivity. East and West, Armenia and Europe: it is her roots and her emotions that the young cellist shares with us here. This recording was made on two different cellos, according to the repertory: an instrument by Francesco Ruggieri dating from 1676 and the famous Giovanni Gagliano of 1756 known as the ‘Sir John Barbirolli’.