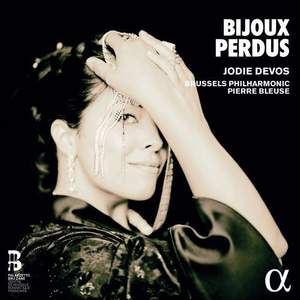 With her small, neat, exact voice and clear diction, Jodie Devos is well suited to such material, which she articulates clearly, getting around the notes with considerable fluency – if with a... — BBC Music Magazine, November 2022, 3 out of 5 stars (Performance) / 4 out of 5 stars (Recording) More…

After her triumph with the album Offenbach Colorature (ALPHA437), Jodie Devos has chosen to follow in the footsteps of one of her compatriots, the Belgian coloratura soprano Marie Cabel (1827 -1885), who at the age of twenty-six scored a phenomenal success in Adolphe Adam’s opéracomique Le Bijou perdu, which she premiered in Paris. She then took on a more dramatic role in Halévy’s Jaguarita l’Indienne, whose great Invocation with chorus (‘À moi ma cohorte!’) again hit the bullseye in a run of 124 performances over just a few months. Cabel enjoyed one hit after another, in Auber’s Manon Lescaut and La Part du diable, Meyerbeer’s L’Étoile du Nord and Le Pardon de Ploërmel, Victor Massé’s Galathée, and Le Songe d’une nuit d’été by Ambroise Thomas, who in 1866 gave her the biggest role of her career: Philine in Mignon, based on Goethe. In partnership with the musicologists of the Palazzetto Bru Zane, who have resurrected and edited all these unjustly forgotten rarities, and Pierre Bleuse conducting the Brussels Philharmonic and the Flemish Radio Choir, Jodie Devos pays tribute to this star of the nineteenth century, whose audacity and sense of mischief she undoubtedly shares!

With her small, neat, exact voice and clear diction, Jodie Devos is well suited to such material, which she articulates clearly, getting around the notes with considerable fluency – if with a certain selfconsciousness. There’s an appealing tang to the tone and an ability to fine the tone down where necessary.

No strain, no squawking, just a lively pirouetting voice hitting an impossible bull’s-eye: it’s a spine-tingling sensation...whatever the tone, whatever the French opera, Devos remains a compelling performer.