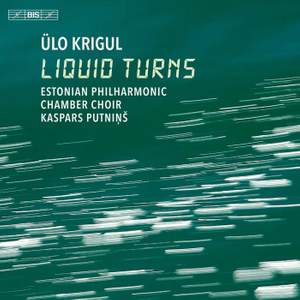 Krigul: And the Sea Arose

"Ülo Krigul studied in Tallinn and Vienna, and has written music in a wide variety of genres. Three works on the present disc – And the Sea Arose, Aga vaata aina üles (‘But Look Always Up’) and liquid turns – were completed in 2019–20 when Krigul was composer-in-residence with the Estonian Philharmonic Chamber Choir. Linked by a common concept and the recycling of musical material, the three form a triptych-like set, here preceded by Vesi ise (‘Water Is’) from 2015. The latter is the first piece that Krigul wrote for the choir and its conductor Kaspars Putniņš and includes ideas that has been carried over into their later collaboration. If Vesi ise here functions as a prelude, liquid turns is to an extent a summation of the programme: the composer has sampled text and music from the two preceding works and random phrases interact and emerge as a new whole. Krigul has chosen his texts from the New Testament, the writings of the philosopher Uku Masing and the sound poetry of Ilmar Laaban."

Their marvellously tailored performances, recorded in Tallinn’s Methodist Church, have been captured by BIS in stunningly extraordinary sound.