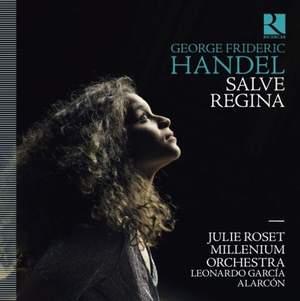 Although a few artistic choices are debatable, the music-making is never anything less than eloquent. — Gramophone Magazine, Awards Issue 2022

Handel: The Lord is my Light, HWV 255: Sinfonia (Andante - Allegro)

I. Gloria in excelsis Deo

Julie Roset, a young French soprano from Avignon, immediately attracted attention with her first recital for Ricercar (Nun danket alle Gott with Clematis) and went on to record a recital of works by Sigismondo d'India with Mariana Flores that met with great critical acclaim. In this new recording she tackles several of Handel’s masterpieces on religious themes: his Salve Regina, Gloria and the motet Silete venti were all composed at the time when the young Handel had been inspired to new heights by his discovery of Roman musical life.

Although a few artistic choices are debatable, the music-making is never anything less than eloquent.