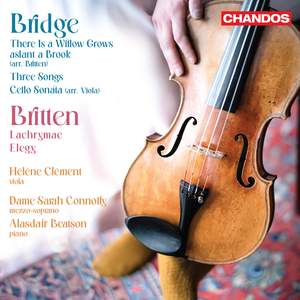 The soul of this beautifully constructed recital is the luminous variety Hélène Clément extracts from the 1843 Giussani viola owned by Frank Bridge and passed on to his favourite pupil, Benjamin... — BBC Music Magazine, October 2022, 4 out of 5 stars More…

Bridge: There is a Willow Grows Aslant a Brook

I. Far, far from each other

II. Where is it that our soul doth go?

Hélène Clément, violist with the Doric String Quartet, is the current holder of the viola previously owned by both Frank Bridge and Benjamin Britten. Her ambition, quickly formed once she first played this instrument, has been to create a testament to both composers and to the instrument that binds them together. This recording, in which Hélène is joined by the pianist Alasdair Beatson and Dame Sarah Connolly, is the realisation of that ambition.

Hélène writes: ‘Frank Bridge owned and played the beautiful viola made by Francesco Giussani, in Italy, in 1843. Benjamin Britten was Frank Bridge’s most beloved pupil, and Bridge gave him the viola as a parting gift when Britten had to embark on a ship’s journey to the United States at the outbreak of the Second World War. The composers were never to see each other again. To record the viola repertoire of both composers, producing the very sound that they would have had in their ears, the sound that inspired their love for the instrument and its special language, became a priority for me.’

The soul of this beautifully constructed recital is the luminous variety Hélène Clément extracts from the 1843 Giussani viola owned by Frank Bridge and passed on to his favourite pupil, Benjamin Britten...the anguished overlapping of mezzo and viola at the climax of ‘Where is it that our soul doth go?’ is one of many revelations on the disc.

This is a highly sensitive performance [of There is a Willow Grows Aslant a Brook], full of probing, haunting vistas on Ophelia’s drowning in Hamlet, which compares more than favourably with the four extant recordings presently available; the clarity of Chandos’s sound (appropriate to a piece of such stillness) gives it the edge, in my view.

This is a clean-cut and impressive survey of the music of teacher and pupil, and it has been finely recorded in Potton Hall.

Connolly brings acute verbal insight to a trio of Bridge’s songs...and the melancholy continues in the tonally elusive Elegy...and his mature masterpiece for the instrument, Lachrymae, both captivatingly played in this excellent Potton Hall recording.