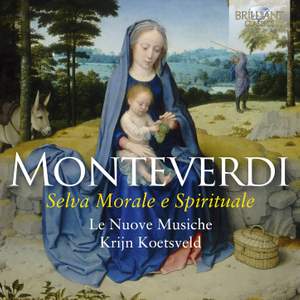 In 1641, the collection Selva morale e spirituale was published in Venice by Bartolomeo Magni. The set raises a number of questions. Was it compiled by Monteverdi himself or were commercial interests at play? Was it a musical testament or another’s tribute to the great composer? Who would have been allowed to go through his overflowing library and choose these most beautiful pieces for inclusion in this last edition to be issued during Claudio Monteverdi’s lifetime (1567–1643)?

The title, literally ‘moral and spiritual forest’, is also puzzling. We should bear in mind that Monteverdi, in his mid-70s at the time of publication, was very elderly for that time in history. He had already served for three decades as Maestro di Cappella of San Marco in Venice, during which time he constantly wrote new music for all kinds of liturgical and semi-liturgical celebrations. And indeed, many of the pieces in the ‘Selva’ appear to have originated from the liturgy of the vespers and the high mass – psalms, hymns, a complete mass, Marian antiphons – pieces we would expect to find in a collection of spiritual music from that time. Surprisingly, however, we also find pieces on secular texts, in the composer’s mother tongue even. Though they can be categorised as morale (moralistic), they would in all likelihood not have been performed in liturgical celebrations but may have accompanied the many semi-liturgical festivities held in Venice.

Also remarkable is that Monteverdi dedicates the Selva to Eleonora Gonzaga, reminding us that despite his sudden departure from the court at Mantua in 1610, Monteverdi maintained strong ties with his former employer, for whom he wrote his seminal operas Orfeo and L’Arianna, the latter almost completely lost save for the Lamento d’Arianna, which he gives in the Selva as the contrafact Pianto della Madonna. Mantua marked his heyday, the time of his books of madrigals and the opera premieres.

For this recording, Le Nuove Musiche have opted for a relatively small, soloist line-up, taking transparency as the starting point. Remarkably, the Selva states that the colla parte lines may be omitted, and this is done here in order to achieve the maximum in individual expression and open texture. Another conscious choice entails breaking with the order of the edition and arranging the pieces to create an appropriate liturgical setting, with the vespers psalms forming the backbone, particularly on the first two CDs.