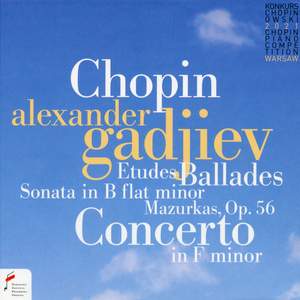 This new recording performed by Alexander Gadjiev was recorded during the 18th International Fryderyk Chopin Piano Competition in Warsaw 2021 and forms part of The Blue Seriesunique music portraits of the most interesting personalities of the International Chopin Piano Competition. The phonographic chronicling of any music event, and especially a competition, is always a very special undertaking. It is not just the magic of reliving past events and capturing fleeting moments, but also evoking incredible emotions, changing fortunes and a moment when history is being written.

October 2021 in Warsaw was a time of outstanding pianism and was generally accepted by all the observers of the event, that it was one of the best ever competitions, in which we had the good fortune to encounter an exceptionally large number of fantastically gifted virtuosos.

Despite Maurizio Pollini's very famous win in Warsaw in 1960, Italy had featured on only one other occasion in the list of prizewinners at the Chopin Piano Competition; that was when the late, lamented Corrado Rollero took fourth prize in 1990. Neighbouring Slovenia had never featured, so there was something of a double celebration when Alexander Gadjiev representing both Italy and Slovenia took joint second prize (with Kyohei Sorita) in the 18th International Fryderyk Chopin Piano Competition in October 2021.

But his supporters ranged more widely that those two countries alone, and international audiences and critics had keenly followed Gadjiev's progress through the Competition. Even when they were not unanimous in their enthusiasm for him they felt he had something to say, and by the time he got to the Final, playing the Concerto in F minor, Op. 21, Krzysztof Stefafski was writing in the Chopin Courier that 'We listened to his ideas with bated breath'.