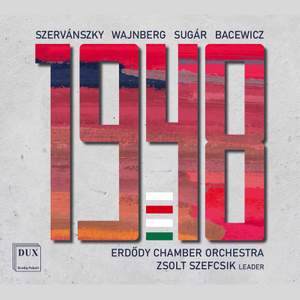 The leitmotif of the recording is 1948, when all the presented compositions were created. It is not a random date in the history of both Poland and Hungary. In that year the official narrative concerning art and culture underwent a change in both countries, as a result of which the composers were forced to adhere to the instructions of the regime's propaganda. The album opens with the Serenade for String Orchestra by Endre Szervanszky (19111977). This is one of the last works from that period kept in the characteristic idiom of Hungarian composers of the interwar period, especially Zoltn Kodly.

The next piece is the Concertino for violin and strings, Op. 42 composed by Mieczyslaw Weinberg (19191996), a Polish composer of Jewish origin. His concerto, following the trend of Neo-Romantic emotionality, is characterized by an extremely melodious and lyrical sound.

It is the Divertimento by Rezso Sugar (19191988) that alludes to Kodaly's style a five-movement composition with lyrical and at the same time serious, sometimes sad overtones and provided with interesting formal solutions.

The album ends with the Concerto for String Orchestra by Grazyna Bacewicz (19091969), kept in the Neoclassical style, which already then distinguished the young Polish composer with its modernity and formal discipline.