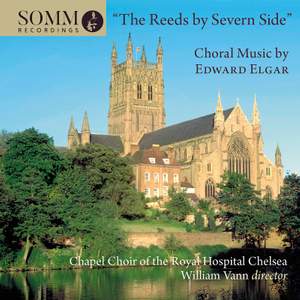 New, The Reeds By Severn Side

All told, this is another feather in the cap for the increasingly impressive Vann-Royal Hospital Chelsea partnership. — BBC Music Magazine, July 2022, 4 out of 5 stars (Performance) / 5 out of 5 stars(Recording)

Elgar: Credo on Themes from Symphonies Nos. 5, 7 and 9 by Beethoven

No. 1, Jesu, Word of God Incarnate

Elgar: Scenes from the Saga of King Olaf

No. 1, There Is Sweet Music

Elgar: I Sing the Birth

"SOMM Recordings announces the release of The Reeds by Severn Side, a ravishing collection of choral works by Edward Elgar, sung by the Chapel Choir of the Royal Hospital Chelsea, led by director William Vann, accompanied by organist Joshua Ryan. Of the 18 featured works, six are first recordings. They traverse Elgar’s remarkable ascension from lowly lawyer’s clerk to self-taught composer to Master of the King’s Musick. And chart the impeccable fusing of his Roman Catholic heritage with the Anglican church tradition to which he contributed several masterpieces. They also reveal what Vaughan Williams described as the 'mystery and [the] miracle' of Elgar’s flowering into the music laureate of Edwardian England, as Andrew Neill, former Chairman of the Elgar Society, observes in his authoritative booklet notes. Alongside juvenilia such as the 16-year-old Elgar’s Credo on Themes from Symphonies 5, 7 and 9 by Beethoven (in James Olsen’s completion) and Drake’s Broughton, to which the 73-year-old composer would return in his Nursery Suite, are diverse works that reveal growing confidence, including early settings of the Mass and first recordings (in English) of the Op.2 trilogy: Jesu, word of God Incarnate; Jesu, Lord of Life and Glory; Jesu, Meek and Lowly. The masterpiece bitonal setting of Tennyson, There is Sweet Music, one of Elgar’s self-described 'choral songs', is a highlight, alongside twin peaks of his anthem writing: O Hearken Thou (heard as the Latin motet, Intende voci orationis meae) and substantial Give Unto the Lord. William Vann and the Chapel Choir of the Royal Hospital Chelsea’s previous SOMM releases include In Remembrance (SOMMCD 0187), described by Gramophone as 'almost unbearably moving', and as 'an album that will have enduring value into the future' by MusicWeb International. Carols from Chelsea (SOMMCD 0161) was a Best Classical Christmas Release, praised for its 'model singing', in The Guardian."

All told, this is another feather in the cap for the increasingly impressive Vann-Royal Hospital Chelsea partnership.