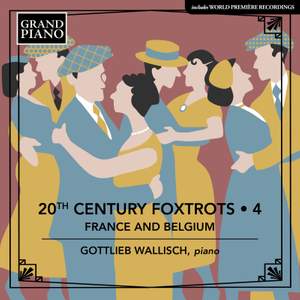 No. 1, Come Along (Version for Piano)

I. Rideau-Girls (Arr. for Piano)

No. 5, Rag-Nocturne (Version for Piano)

Gottlieb Wallisch continues his acclaimed survey of jazz-influenced piano literature. In this volume we explore le tumulte noir (‘the Black craze’) in the French-speaking countries after the First World War, taking us to Paris and Brussels where the mood was hot for dancing. The fashionable status of this new craze attracted writers, composers, intellectuals and artists from all over the world, with American jazz music as the latest rage in the cafes and bistros of the day. The influence of dances from overseas spread like wildfire, taking hold amongst French and Belgian composers eager to free themselves from Germanic Wagnerism while riding the wave of popularity of hit records and cinema.