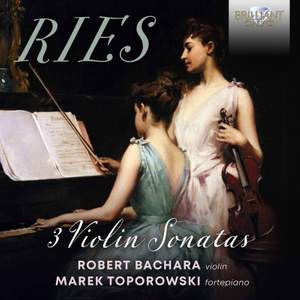 Ferdinand Ries was without doubt one of the most prolific composers and most significant figures in the musical life of the early to mid-19th century. In our time, he is known above all as one of Beethoven’s few students, and though we cannot be sure that Beethoven ever uttered the famous sentence ‘He imitates me too much’, the towering figure of Beethoven certainly does cast its shadow over Ries’s wonderful oeuvre. Though it’s true that Ries’s musical language owes much to that of Beethoven, with the gift of hindsight we can now fully appreciate the originality of the Ries’s style.

Although Ries did compose several oratorios and operas, today we see his music more as an important stage in the development of German absolute music, a key link in the progression from C.P.E. Bach, Haydn and Beethoven, through to Brahms and Bruckner.

This disc contains three of Ferdinand Ries’s numerous sonatas of a type ‘with accompaniment’ (more or less obbligato; in some sonatas of this kind, however, it is even possible to omit the melodic instrument part). The idea behind this format was to ‘fill in’ the decay of the keyboard instrument’s tones with the sustained sound of a violin or wind instrument, thereby increasing the dynamic power of the music and highlighting its important moments. The Sonata in F minor, op.19, was composed in 1810 and is in many ways very Beethovenian. The two Sonatas, op.59, are numbered by the composer himself among his piano sonatas, so we may consider them essentially piano sonatas with violin accompaniment.