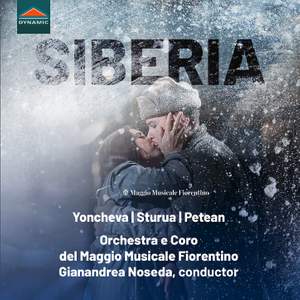 the richness of tone, expressive subtlety and sense of style that Sonya Yoncheva (Stephana), Giorgi Sturua (Vassili) and George Petean (Gleby) lavish on the piece is just what is needed. Conductor... — BBC Music Magazine, May 2022 More…

Ogni giorno in me amor (Live)

Gabriel Faurè considered Umberto Giordano’s Siberia to be one of the most interesting and singular works of the early 20th century. The opera’s tragic narrative follows Prince Alexis’s courtesan Stephana. She falls in love with an innocent soldier, Vassili, who is sent to Siberia for killing the Prince. Stephana gives up her life of luxury to follow him but cannot escape her past. With its intensely Russian atmosphere and passionately soaring melodies, Siberia was Giordano’s favourite among his operas. This acclaimed Fiorentino production was greeted with multiple ovations. Conducted by Gianandrea Noseda with an outstanding cast led by soprano Sonya Yoncheva, who was the Singer of the Year of the 2021 Opus Klassik award.

the richness of tone, expressive subtlety and sense of style that Sonya Yoncheva (Stephana), Giorgi Sturua (Vassili) and George Petean (Gleby) lavish on the piece is just what is needed. Conductor Gianandrea Noseda presents Giordano’s music to its best advantage.

Noseda conducts with his familiar intensity and attention to detail, immaculately sustaining the ebb and flow of dramatic tension and mining the subtleties of Giordano’s orchestration for all their worth.