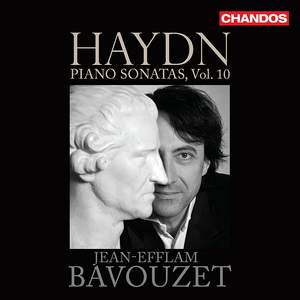 Bavouzet captures much of the essential ‘Papa Haydn’ style behind these works. Measured, lively, sparkling and beautifully phrased, his playing is unimpeachable. Alongside oodles of charm, there... — BBC Music Magazine, April 2022, 4 out of 5 stars (Performance) / 5 out of 5 stars (Recording) More…

His multi-award-winning recordings and dazzling concert performances have long established Jean-Efflam Bavouzet as one of the most outstanding pianists of his generation. This latest album – the tenth – in his cycle of the complete Haydn sonatas is built around the Grand Sonata in C major, Hob. XVI: 50, a late work the first movement of which is one of the most highly developed that Haydn ever conceived for the keyboard. Bavouzet has surrounded this with less well-known works: Two very early sonatas (Nos. 3 & 4) provide a stark contrast to the later works (Nos. 28 & 45). The album ends with the Arietta con 12 Variazioni. Bavouzet notes ‘ The Variations in E flat major and the Sonata in A major, Hob. XVI: 30, were for me the marvellous revelations of this programme. In the E flat major Variations (the lovely theme of which Mozart borrowed in his Sonata, KV 282!). The chief question was to know whether to repeat the theme at the end, as certain editions recommend. After several experiments, I finally opted for a solution perhaps a little anachronistic, by construing the entire last variation as a long, gradual crescendo which takes us from the sombre and serious atmosphere of the preceding variation towards the brilliant light of the unadorned chords that conclude this magnificent cycle.’

Bavouzet captures much of the essential ‘Papa Haydn’ style behind these works. Measured, lively, sparkling and beautifully phrased, his playing is unimpeachable. Alongside oodles of charm, there is an unfailing brilliance to his articulation.