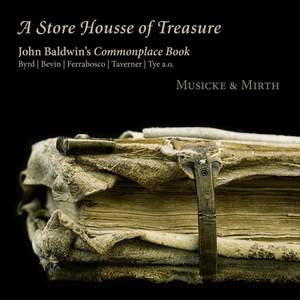 Offer, A Store Housse of Treasure

anon.: A Piece Without Title

Ferrabosco, A I: Ut Re Mi Fa Sol La

Taverner: In Nomine, solmised (I)

Bevin: I Had Both Monye & Aa Frende

Bevin: By Mirthe Much Sicknes

Baldwin, J: In the Merie Monthe of Maye

The singer, composer and music copyist John Baldwin (c.1560—1615) trained as a choirboy in the royal court chapel in England between 1580 and 1590 and was taught music theory and ensemble playing in conjunction with viol playing. Armed with this practical education, he performed a broad repertoire, encompassing church music, theatrical performances and evening entertainment for the feasts of wealthy citizens. He compiled the repertoire performed in this musical environment in his so- called Commonplace Book, with the aim of preserving the pieces contained therein for future generations. In the introductory poem to his manuscript he describes his book as ‘a store housse of treasure’. The pieces transmitted are diverse, ranging from rhythmically sophisticated instrumental pieces over humorous songs to profound motets. This recording plumbs the depth of this musical treasure trove, bringing to life a fascinating era of English music history.