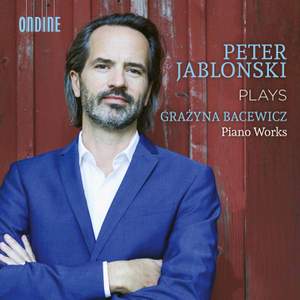 This album is pianist Peter Jablonski’s third solo album for the Ondine label. In this album Jablonski represents Grazyna Bacewicz’s (1909–1969) dazzling piano etudes and piano sonatas which are hardly known outside of her native Poland. Jablonski’s piano albums have received an enthusiastic response and his previous album release received Editor’s Choice from the Gramophone magazine.

There’s a sense of Bacewicz’s compositional imagination really taking wing in these pieces, and Jablonski commits to her vision. The First Sonata feels full of ambition, and Jablonski draws out all of its rhythmic and emotional complexity.

The two-fold pleasure of this release is experiencing the interesting if unfamiliar music of an important woman composer, played by a pianist in the full flower of his mature, imaginative artistry.