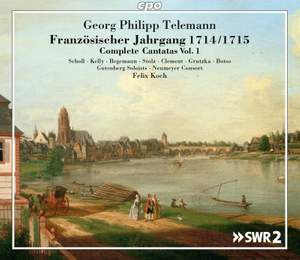 It seems invidious to pick out just two soloists when their vocal and instrumental colleagues, under Koch’s judiciously elastic command, so convincingly animate Telemann’s variegated, even at... — Gramophone Magazine, April 2022 More…

I. Valet will ich dir geben

V. So weiche, was mich kränkt

"Another large-scale, incredibly exciting project is dedicated to the world’s very first complete recording of an entire annual cycle with seventy-two church cantatas by Georg Philipp Telemann for large ensembles (Frankfurt, 1714/15). This project directed by Felix Koch is particularly committed to including young female and male soloists chosen by the Telemann Project for performances together with proven specialists in the field of Baroque song. All the singers perform in the 'Gutenberg Soloists' vocal ensemble consisting of twelve members – in accordance with the Baroque practice in which the solo parts are assumed by members of the choral ensemble. Things get underway with the two CDs of Vol. 1, which present cantatas from the late summer of 1715 and five additional cantatas for the Lenten season from the cycle known as the 'French Annual Cycle'. A significant reference is found on the original Frankfurt organ part of Telemann’s cantata 'Gott schweige doch nicht also' from this year: 'Judica, from the French Annual Cycle'. What this means is that the cantata concerned was intended for the Fifth Sunday in Lent; that is, it belonged precisely to the annual cycle of church cantatas that even contemporaries called 'French' because of its style. This is music worth discovering – and not only by and for Telemann fans!"

It seems invidious to pick out just two soloists when their vocal and instrumental colleagues, under Koch’s judiciously elastic command, so convincingly animate Telemann’s variegated, even at times daringly voluptuous painterly responses to Neumeister’s texts – even to the point where polish is sacrificed to passion.