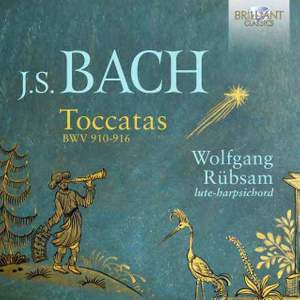 - Booklet in English contains notes on the music by the German organist, church musician and educator Christian von Blohn, as well as a note on the instrument by its maker and a biography of the artist

- A Toccata (from Italian toccare, to touch) is a virtuoso piece of music typically for a keyboard instrument, featuring fast-moving, lightly fingered or otherwise virtuosic passages with or without imitative or fugal interludes, generally emphasizing the dexterity of the performer’s fingers. Originating in Renaissance Italy (Frescobaldi and others) the Toccata travelled North and in Bach’s time it was an important form of keyboard writing. Bach’s seven toccatas are highly intricate and elaborate works in free, quasi-improvisatory style, demanding a high level of virtuosity.

- Wolfgang Rübsam is internationally known as an authoritative Bach interpreter, from recordings of the organ and harpsichord on several different labels. This new recording is played on a lute-harpsichord, an instrument that Bach would have had at home for both music-making in the family and for teaching. The touch required and the sonority produced is delicate, subtly shaded and closely related in its effect to the music of Bach’s French contemporaries, whose music he knew well, such as François Couperin, Jean-Philippe Rameau and Louis Marchand. The sound is warmer, as it has gut strings and no dampers.