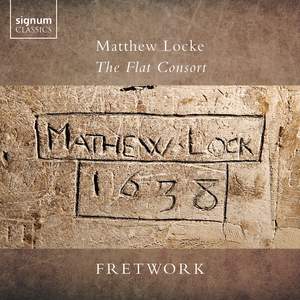 Locke: The Flat Consort for my cousin Kemble: Suite No. 1 in C minor

Locke: The Flat Consort for my cousin Kemble: Suite No. 2 in B flat major

Locke: The Flat Consort for my cousin Kemble: Suite No. 3 in D minor

Locke: The Flat Consort for my cousin Kemble: Suite No. 4 in B flat major

Locke: The Flat Consort for my cousin Kemble: Suite No. 5 in A minor

Recording of the Week,  Locke consort works from Fretwork

The acclaimed consort mark the 400th anniversary of Matthew Locke's birth with a selection of his consort works from the twilight of the English consort tradition.

Matthew Locke was born 400 years ago in 1622, and while he is often ranked as one of England’s finest composers, he is still unaccountably neglected: his music may not be as immediately appealing as his immediate successor, Henry Purcell, nor as wide-ranging as William Byrd, yet his forceful musical personality and luxuriant technique place him in the first echelon of English composers, with his works described by Richard Boothby of Fretwork as having a "quixotic, capricious restlessness that is constantly challenging the listener to follow his argument... a thrilling musical ride.”

Accompanying Fretwork on continuo for this recording are David Miller (archlute and theorbo) and Silas Wollston (harpsichord).

The cover of the album bares an inscription in the walls by the choir stall of Exeter Cathedral, thought to have been carved by the composer during his time as a member of the choir there.

In 2021, Fretwork celebrated its 35th Anniversary. In the past three and a half decades they have explored the core repertory of great English consort music, from Taverner to Purcell, and made classic recordings against which others are judged. Their recent critically-praised releases with Signum include ‘If’ and ‘Lamento’ - both with counter-tenor Iestyn Davies - and ‘In Nomine 2’ (★★★★★ - BBC Music Magazine).

the delicious way in which Locke’s fantazias – unlike those of Jenkins or Lawes – present a cornucopia of switches in tempo or affect is matched by Fretwork’s agility in moving from one colour and affect to the next.

The uniquely delicate sound of the viol consort – wispy, almost spidery at times – is on display in the faster-moving pieces, with the performers seemingly leaning into how drastically different it is to the more familiar sound of the string quartet….I can’t think of any safer hands for that project than Fretwork’s; they have taken a deep dive into the history of English chamber music and come back clutching fistfuls of pearls.