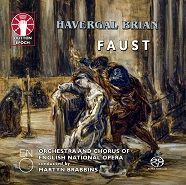 The British composer Havergal Brian (1876-1972) considered his opera “Faust” to be his greatest single achievement, but he never heard a note of it performed. To mark the 50th anniversary of the composer’s death, the orchestra and chorus of English National Opera, recorded at Abbey Road Studios, give the world premiere of the complete work under the baton of the ENO’s Music Director, Martyn Brabbins.

Composed in 1955-56, Brian’s opera arguably comes closer than any other musical adaptation of “Faust” to the spirit of Goethe’s original, setting large portions of Part One of the drama in the original German. Brian’s own skilful adaptation distils the essence of Goethe’s epic tragedy, focusing on the central figures of Faust, Gretchen, and Mephistopheles.

Highlights include the spectacular orchestral “Night Ride of Faust and Mephistopheles,” and the Cathedral scene, in which the terrified Gretchen is pursued by an evil spirit while a sinister invisible chorus intones the Latin “Dies Irae.”

Showcasing some of today’s finest operatic talent, this SACD release – which includes a comprehensive 68-page booklet with the complete libretto (in the original German as well as English translation), a detailed synopsis, and an in-depth essay – represents a landmark in the history of British opera on record.

The opera is a remarkable achievement...The central roles are all well done. Tenor Peter Hoare summons up the entire range and expressive variety required for Faust. David Soar’s voluminous bass-baritone enables him to go right down into the vocal depths of Mephistopheles. Mezzo-soprano Allison Cook brings certainty and determination to her impassioned Gretchen.

Brianophiles need not hesitate, of course, but with such a splendidly realised performance, lovers of British opera will hopefully be won over to a unique and – The Tigers (4/15) aside – hitherto unheard operatic voice.