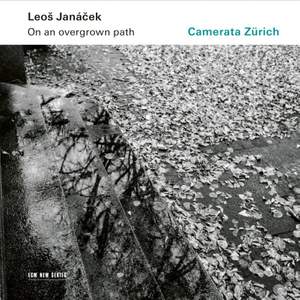 Leos Janacek: On An Overgrown Path

Under Igor Karsko’s committed direction, the playing of Camerata Zürich is superb and very well recorded, and there is a clear feeling throughout for the rich sentiment underlying these memories... — BBC Music Magazine, January 2022, 4 out of 5 stars More…

'On An Overgrown Path', Leos Janaceks 15 pieces-spanning piano cycle, is here presented in a reshaped guise, arranged for string orchestra and interpreted by the Camerata Zurich under lead violinist Igor Karskos direction. This is the premiere recording of the orchestral adaption.

In this programme, Janaceks cycle is bookended by Josef Suks Meditation on the Old Czech Chorale St. Wenceslas and Antonn Dvoraks Notturno pieces that are thematically connected to the folkloric elements found in Janaceks composition.

French writer Maja Brami wrote poems to accompany the new arrangement of On An Overgrown Path, and their recorded versions, spoken by the writer herself, are included on the album, contextualizing the cycle with inventive analogies to Janaceks life.

Much of the cycle 'On An Overgrown Path' previously captured in its original design on the ECM New Series release 'A Recollection' by Andras Schiff had originally been conceived for harmonium, a popular domestic instrument in Janaceks days, and was only later rearranged for piano, the instrument the remaining pieces were written for.

Ultimately divided into two volumes referred to as books, the first, comprising ten pieces, was published in 1911, and the second posthumously in 1942.

Moving seamlessly between subtle harmonic shifts, generous folkloric gestures and more sombre scenes from Janaceks past, the cycles nuances are respectfully translated to strings on the recording, and the alternatingly light and dark themes that flare up across the 15 pieces turn into a compelling chiaroscuro.

Under Igor Karsko’s committed direction, the playing of Camerata Zürich is superb and very well recorded, and there is a clear feeling throughout for the rich sentiment underlying these memories of youth.

Rumler’s arrangements are imaginative without being obtrusive, and filled with telling details of colour and texture...If you love this repertoire, it’s well worth a listen.