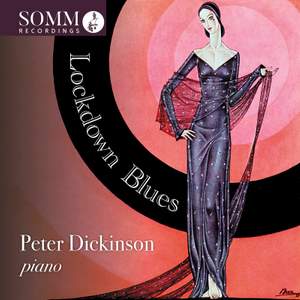 Gershwin: Three-Quarter Blues (From "After Henry")

Ellington: It Don't Mean a Thing (If It Ain't Got That Swing) [Arr. P. Dickinson for Piano Solo]

Ellington: (In My) Solitude [Arr. P. Dickinson for Piano Solo]

Ellington: Don't Get Around Much Anymore (Arr. P. Dickinson for Piano Solo)

Ellington: I Never Felt This Way Before (Arr. P. Dickinson for Piano Solo)

Ellington: Do Nothin' Till You Hear from Me (Arr. P. Dickinson for Piano Solo)

"SOMM Recordings announces the perfect escape from Lockdown Blues with a collection of appealing piano miniatures compiled and performed by Peter Dickinson to chase all your cares away. Lockdown Blues includes soothing masterpieces by Erik Satie (Trois Gnossiennes, Trois Gymnopédies), Francis Poulenc (Bal fantôme, Pastourelle) and Edward MacDowell (To a Wild Rose), alongside Eugene Goossens’ melancholic Lament for a Departed Doll and Samuel Barber’s valedictory Canzonetta. There is whimsy in George Gershwin’s Three-Quarter Blues (familiar to British audiences as the theme to radio and television’s After Henry) and Who Cares? from the musical Of Thee I Sing. Peter Dickinson’s career as a pianist has largely been in recitals, broadcasts and recordings with his sister, mezzo Meriel Dickinson, and he has worked with many other performers. Dickinson’s Paraphrase II is included on Nathan Williamson’s 20th-century British piano music collection, Colour and Light (SOMMCD 0196) and was praised by the British Music Society as ‘a Theme with six hugely contrasting variations exploring the outer edges of tonality in a brilliant, structurally refined way’."