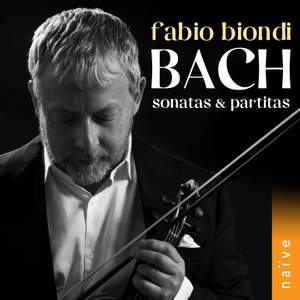 Newly signed to the naïve label, violinist Fabio Biondi, the celebrated founder and director of Europa Galante, here presents his interpretation of one of the major peaks of the solo violin repertoire: the Sonatas and Partitas of Bach.

For many years a passionate devotee of this Holy Grail of violinists and having performed many of the works individually in the course of his career, Fabio Biondi is now, at the age of sixty, using his maturely ripened art to record the complete set for the very first time: it is the culmination of long and patient study, as well as of a process of personal development. For years Biondi was intimidated by Bach’s writing for solo violin: so intimate, yet so universal, so close to the essence of things - which the music often expresses through silence and pure, untranslatable sound - and so technically demanding as well.

To reveal the music’s profound meaning, its vitality and contemporaneity, and to share his findings with others: this is what has impelled him to record this album. To complement his musical presentation, he asked Akira Mizubayashi, a Japanese writer of French novels permeated by a musical sensibility, for a newly written work with which to grace the CD booklet.

Most listeners will be familiar with Bach’s double triptych of Sonatas and Partitas, without necessarily knowing them in detail. All the well-known landmarks are here - the famous Bourrée of the First Partita, the challenging Chaconne of the Second, the lively introductory Preludio and sprightly Gavotte en rondeau of the Third Partita. Fabio Biondi makes these thirty-two dances intensely present in his infinitely nuanced interpretation.

He casts a radiant light on each piece, fully honouring its dance- like character while flexibly expanding its often polyphonic lines with poetic strokes of the violin bow. Without any superfluous embellishment, at a single breath his masterful playing sets ablaze the full spectrum of forms, textures and tempi, giving life to the music - the most natural life imaginable.

One is immediately struck by Biondi’s trademark tonal opulence, warmth, cantabile phrasing and gently vibratoed intensity, virtually unique among players on period instruments...Biondi’s sensitive rethinking of repeated generic patterns becomes a natural part of the musical continuum rather than a passing distraction.

an enterprise that viewed overall proves a stimulating and rewarding listening experience, a set of Bach solo violin works like no other.